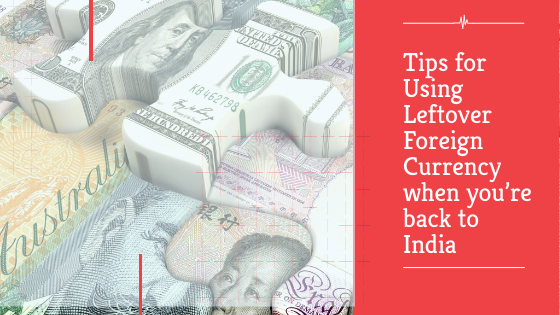 Experiencing an entire foreign trip without spending cash is quite difficult. Foreign currency is often accumulated in notes or coins, either as a result of withdrawing more than you could spend or as a gift from family or friends abroad. The likelihood of leaving with unused foreign currency is high after every trip abroad.

A person coming into India from abroad can bring with him foreign exchange without any limit. However, if the aggregate value of the foreign exchange in the form of currency notes, bank notes or traveler’s cheques brought in exceeds USD 10,000 or its equivalent and/or the value of foreign currency notes alone exceeds USD 5,000 or its equivalent, it should be declared to the Customs Authorities at the Airport in the Currency Declaration Form (CDF), on arrival in India.

If you aren’t a frequent traveler to the same country, you would not need the leftover currency. In such a scenario, what options do you have?

In order to get the money in INR, you just need to get in touch with the company that issued the forex card. But in this case, you’ll have to pay exchange rates once more in the process. Moreover, in a currency exchanger or bank, you can exchange any unspent currency notes and coins for INR.

2. Don’t wait for the currency value to Increase

The value of foreign currencies fluctuates continuously. Thus, you might want to consider encashing your unspent currency notes before the price rises. With time, you may or may not get a better value for it.

3. Keep the foreign currency for your next trip

Keep the foreign currency aside in case you plan to visit the same country in the near future. It will save you the cost of exchanging INR for that currency later on. Make sure it’s within the RBI’s guidelines. Otherwise, encash the excess amount.

4. Keep as a Memento or give to Loved Ones and Friends

Is coin collecting something you enjoy or are your family or friends into it as well? Keep some as keepsakes or give them as souvenirs. According to the RBI, foreign coins can be retained indefinitely.

As the value of the currency fluctuates, RemitX strongly advises you to encash your currency notes as soon as possible. It is risky to make forecasts if you are not an expert in forex.